This is a special Golden Triangle (Delhi, Agra and Jaipur) tour  with emphasis on Indian food and Indian cooking. It’s meant for tourists who want  a detailed introduction to Indian cuisine during their tour.  It covers the best of north and western Indian cuisines without compromising on the must see sights in any way. The culinary activities like food tours, cooking classes, kitchen tours, restaurant visits etc. are led by a qualified chef for maximum attention to detail.

In private or shared car with driver, air or train.

Anyone to Expert. Depends upon destinations and activities chosen.

First day in Delhi will begin with a visit to  iconic Delhi landmarks, Lotus Temple, a beautiful Baha’i house of worship built in 1986 and Qutub Minar, a 72 m tall tower built in 1193 and still standing tall. Noon will be the time to begin the food tour of Delhi from Old Delhi. This tour will serve as a great introduction to Indian food and culture and will help set the tone for rest of your trip to India. There will be approximately 16-18 different Indian food dishes from different Indian cuisines and you’ll visit  up to 10 different food joints in Old Delhi, Central and South Delhi. All of the food joints that you’ll visit have been in business for generations and are famous for their quality of food. The oldest place in the list is in business for 110 years and youngest for 40. You’ll sample delicacies like samosa, lassi, butter chicken, kulfi (Indian ice creams), melt in m0uth kebabs and much more.

The Old Delhi part of the tour will take you through the old, narrow streets of medieval Delhi marked by old mansions, centuries old market and thousands of people going on with their daily routines. Each lane in this area is a market for different commodity like invitation cards, spices, bicycles, cameras, utensils, vegetables, clothes , shoes, books and much more. The food tour will also include a visit to Spice Market of Delhi in which the you will learn about various kinds of spices used in Indian cooking and spending a few minutes inside a temple which feeds more than 10000 people every day. 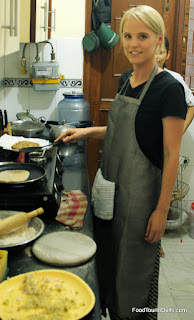 It’s time to cook some of the things that you sampled the day before in a half day cooking class led by a chef and his family.  The class will begin with making of masala chai (Indian tea) along with some fried Indian snacks, pakodas which are best enjoyed hot. Enjoy your piping hot chai with pakodas as the chef gives you an introduction about Indian food and he things to expect during the cooking class. Then it’ll be the time to don the aprons and start cooking. You’ll learn to cook proper Indian meals consisting of pulao, daaal (lentils), egg plant,raita, rotis (flat Indian breads), stuffed parathas (stuffed and fried rotis), vegtables and more. Dessert will be in form of halwa. Non-vegetarian food can also be covered in form of butter chicken, chicken tikka, mutton curry etc.
The cooking class will end with a meal of all the things cooked by you. All the participants will also receive a small gift hamper of some of the basic Indian spices used in a typical north-Indian kitchen. After the cooking class, you can visit India Gate, Rajpath and President’s House. This area is the favourite family picnic spot for residents of New Delhi and is quite picturesque, specially after dark.

Wake up early and get in to your vehicle for a 3 hours drive to Agra. Leave your luggage at the hotel and reach Taj Mahal, one of the 7 wonders of the world. According to most people, it looks much better in real life than in photos. Enjoy your time there, soaking in all the sights and thousands of small but mind blowing details that most people miss without someone to tell them. Take a walk in the gardens and enjoy the play of water in fountains which increase it’s beauty many times over. Sit on the marble bench and get your photos clicked in the same place where countless celebrities like Diana have posed for pictures. Walk out and reach Agra Fort made of red sandstone for an interesting history lesson. As you walk through various parts of the fort, notice the breathtaking views of Taj Mahal as well as the Agra town which will come up.

Elephants of the Pink City

Another early wakeup and we’ll drive towards Jaipur, the famous pink city of India. After check in at hotel, it’s time for a visit to the famous Hawa Mahal (Palace of wind). It’s 5 stories tall and built of red and pink sandstone. Front of Hawa Mahal consists of 953 small windows (jharokhas) which are decorated with intricate lattice work. After this, we leave to enjoy some play time with elephants, the gentle giants. But first, it’s time for a traditional Rajasthani lunch served in thaali (platter). Once meal is finished, play time will begin. You’ll have the chance to ride, feed and play with the highly trained and friendly elephants for hours. Ride an elephant of your choice in to jungle and sit under the open night sky around a bonfire. A demonstration of folk dance and handicrafts is also possible.

Another early wakeup and we’ll drive towards Jaipur, the famous pink city of India. After check in at hotel, it

‘s time for a visit to the famous Hawa Mahal (Palace of wind). It’s 5 stories tall and built of red and pink sandstone. Front of Hawa Mahal consists of 953 small windows (jharokhas) which are decorated with intricate lattice work. You’ll then visit Jantar Mantar, an incredible astronomical observatory built in early 18th century by Maharaja Jai Singh. After observatory, we visit Jaipur City Palace which is still partly a royal residence in addition to housing a museum. Then it’s time to visit the famous Jal Mahal, a palace constructed on an island in Man Sagar Lake.

Get to know Jaipur better via a day long food tour as you explore it’s sights, smells and flavours at once. After a light breakfast, gather in the walled city for a drink of salty lassi. You’ll  alk through the streets and pink markets enjoying the sights of this easy going city and sample all the delicious food it has to offer. During the food tour you’ll sample different types of delicious kachaouris, chai prepared over charcoal fire, some justly famous Rajasthani sweets, around half  a dozen different snacks and a big traditional Rajasthani dinner at the end.  During the food tour, we’ll cover sights such as Galta jee Temple (with it’s resident population of monkeys and langoors), Amer Fort and a few more depending upon available time.  Explore the local markets with their mind boggling varieties of colours, fragrances and people selling and buying almost everything under the sun like clothes, jewelery, bangles, shoes, utensils, spices and much more. The visitors will be introduced to some of the ingredients used in traditional Rajasthani cooking.

After a hearty breakfast, we’ll pack our bags and visit Nahargarh Fort for it’s impressive view of the city. Nahargarh means abode of the tigers and was constructed in 18th century. It was used by the royal family as a favoured picnic spot and it doesn’t take long to guess why. The fort is in very good condition and offers the best location for enjoying the view of city from a height. After spending some time here, we’ll head back to our cars and drive back to Delhi to end this journey.

The cooking classes and food tours will be led by Rajeev Goyal, a chef and restaurant owner. Trained and qualified guides will be provided at each monument during sightseeing tours.